The Science of SAGE

The Stratospheric Aerosol and Gas Experiment, SAGE, is part of NASA’s mission to provide long-term measurements that help humans better understand and protect Earth’s atmosphere. SAGE measures the Earth’s sunscreen, or ozone, along with other gases and aerosols, or tiny particles in the atmosphere. SAGE makes its measurements by locking onto the sun or moon and scanning the limb, or thin profile of the atmosphere from the unique vantage point of the International Space Station (ISS) which helps maximize the scientific value of SAGE III observations.

Just as humans need a smudge of zinc oxide on the nose at the beach, the Earth needs sunblock too. Earth’s sunscreen is called ozone. One of the things SAGE measures is the amount of ozone in the stratosphere. 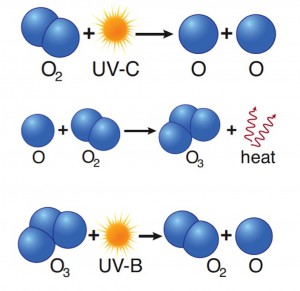 Ozone is a highly reactive molecule made up of three atoms of oxygen it is created and destroyed naturally, a process mediated by sunlight. Although it represents a tiny fraction of the atmosphere (0.02 – 0.1 parts per million (ppm) based on volume, O3 is vital for life on Earth. O3 is found mostly (about 90%) in the stratosphere—a layer of the atmosphere between 10 and 31 miles (~16 to 50 km) above the surface. The so-called ozone layer acts as Earth’s sunscreen, protecting the biosphere from receiving too much of the Sun’s ultraviolet (UV) radiation, and is therefore vital for life on Earth. Without the ozone layer, exposure to ultraviolet radiation would increase causing skin cancer, cataracts, and reduced crop yield. 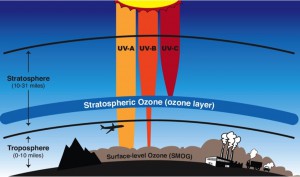 Ozone is also found in the troposphere where it is considered a pollutant. Chemicals emitted from industrial processes, vehicle exhaust, and other products of  fossil fuel combustion form ozone through a more complex series of chemical reactions. As concentrations of these pollutants involved in ozone formation (precursors of ozone) increase with industrialization and vehicle traffic, ozone concentrations increase at ground level where we breathe.

SAGE missions also measure aerosols, or tiny, airborne solid and liquid particles in the atmosphere. Most are naturally occurring like sea salt, dust, ash from a volcano or carbon from a forest fire, or sand. About 10 percent of aerosols are anthropogenic, or human-made from fossil fuel combustion, exhaust, or carbon from man-made fires. Humans also alter the land surface, which can change the way natural aerosols are distributed. There are three types of aerosols: 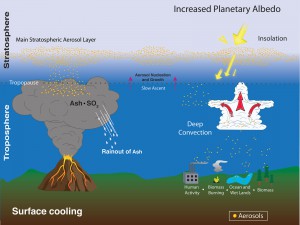 1. Stratospheric aerosols which are variable, transient, and impact temperature by scattering light and changing Earth’s reflectivity and contributing to the energy budget, heating or cooling the Earth 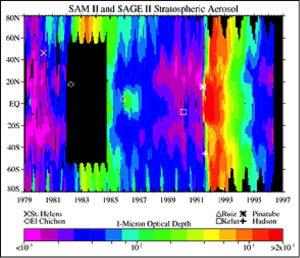 2. Polar Stratospheric Clouds, which are formed when in the extremely low temperatures of the polar stratosphere in winter, nitric acid and small traces of water vapor condense into clouds, primarily below 25 kilometers altitude. When these clouds pass near mountains, atmospheric gravity waves in the lower atmosphere (troposphere) can provide enough vertical lift to push these clouds up to higher altitudes. These clouds play a key role in the depletion of stratospheric ozone.

3. Aerosols also affect clouds. They play a key role in forming clouds, acting as cloud condensation nuclei. Depending on what type of aerosol is seeding the cloud can be brighter and more reflective. SAGE sees the thin, high cirrus clouds. We can’t model the impact on surface temperature without aerosols. 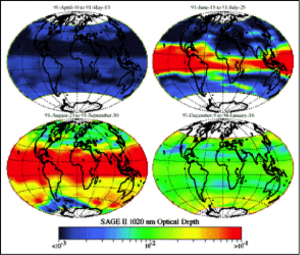 SAGE also can detect nitrogen dioxide(N02), which affects ozone; water vapor, which is related to methane and the speed and circulation of the atmosphere; temperature and pressure, using oxygen; and at night it can profile nitrogen trioxide (N03), and chlorine dioxide (OCLO), which impacts variability in ozone.