About SAGE III on ISS

The Stratospheric Aerosol and Gas Experiment (SAGE) is a series of instruments designed by NASA to observe stratospheric ozone, aerosols, and water vapor from space. SAGE III is the newest and most advanced addition to the SAGE family.

Over the past four decades, the SAGE family of instruments have been critical in making accurate measurements of ozone loss in Earth’s atmosphere. The data collected from SAGE II helped leaders around the world institute an international treaty banning products containing harmful chemicals that destroy stratospheric ozone. SAGE has played a key role in measuring the onset of ozone recovery resulting from the internationally-mandated 1987 Montreal Protocol regulations.

Today, the SAGE technique is still the best for the job, and NASA scientists sent the third generation of the instrument into space on February 19, 2017. Instead of flying on an un-manned satellite, SAGE III is mounted to the International Space Station (ISS) where it operates alongside experiments from all over the world in the space-based laboratory. It was robotically installed on the outside of the ISS and is now taking important measurements of gases and aerosols over 70% of the planet.

SAGE III takes measurements across the globe using a technique called occultation. Every time the sun, or moon, rises and sets, SAGE uses the light that passes through the atmosphere to measure gases and particles in that region of the atmosphere. From the ISS this happens over 30 times per day.

SAGE III is externally mounted on the International Space Station.

SAGE III is the third generation of solar occultation instruments operated by NASA. The renewal of SAGE is designed to fill an anticipated gap in ozone and aerosol observations.

SAGE III was robotically mounted on the ExPRESS Logistics Carrier on the International Space Station.

SAGE III launched on a SpaceX Falcon 9 in February 2017. 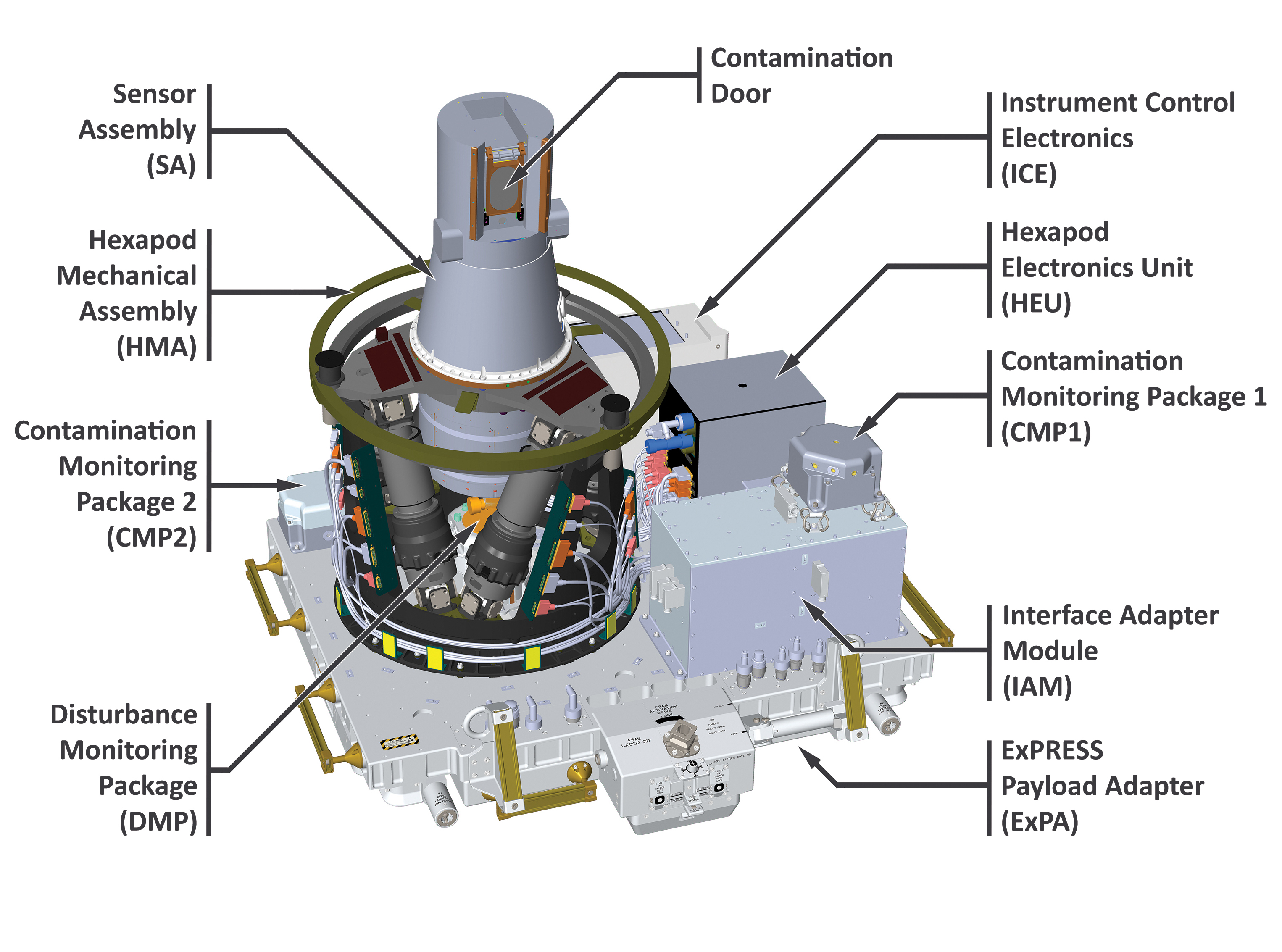 The Level 1 and 2 science products are derived from the Level 0 data by algorithms running in the SAGE III/ISS Science Computing Facility (SCF) located at NASA Langley Research Center (LaRC). External ancillary data sources needed to proceed with Level 1 and 2 processing are: observation time/location and pressure/temperature profiles of the neutral atmosphere. GPS time and ISS position/velocity are standard products provided by ISS and are incorporated into the nominal SAGE III/ISS payload data stream. At the advice of the pre-flight ROSES selected Science Utilization Team, the Modern-Era Retrospective analysis for Research and Applications, Version 2 (MERRA-2) is used for temperature/pressure profiles of the neutral atmosphere. This is the same ancillary source used in creating the SAGE II V7 record. MERRA-2 is generally available three weeks after the end of the preceding month. Once the necessary ancillary information is available, processing a month of occultations is complete within a day or so.

The mission team reviews the results to assess the overall quality and remove any obvious failures, which are rare, not flagged by automated checks of data consistency, or stressing cases that are used for product improvement. Cleared data are then posted to the LaRC Distributed Active Archive Center (DAAC) for public distribution. These steps are usually completed within the required 10 days from receipt of the necessary inputs.

The SAGE III/ISS SCF processing system architecture consists of two Linux-based servers that act as a data storage and production pair. The complete system has two of these pairs: one performs the standard processing on a monthly cadence; the other pair is for research/development processing and supplying redundant capabilities during reprocessing campaigns, such as for the initial release of version 5.1 products. There are also three Linux-based development servers that primarily act as development servers, though they also hold a copy of the raw, level 0, and intermediate files, and can act as backup servers for production. These development servers are also used for analysis, testing, and validation of the Level 1 and Level 2 data products. All seven of these servers have been verified to produce identical results between various stages of processing.

The SAGE III/ISS Team is proud to announce the second official release of SAGE III/ISS products that are suitable for use in both validation and research studies for data products as described in the associated Data Product User’s Guide DPUG. The nominal monthly release of new SAGE III/ISS events will be processed by the V5.2 algorithm starting with March 2021. Version 5.1 remains publicly available for events from June 2017 through February 2021.  This statement applies to SAGE III/ISS Version 5.2 Solar Level 1B, Solar Level 2, and Lunar Level 2 data products.  The SAGE III/ISS Team recommends using Version 5.2 instead of Version 5.1 because of the modifications and improvements mentioned below.

Get SAGE III/ISS data from the Atmospheric Science Data Center

Upcoming:
June 28, 2022
Title: A New Challenge in Stratospheric Chemistry: Wildfire Smoke
Abstract: Although pyrocumulonimbus towers have long been known to reach the stratosphere and inject particulate matter, their chemical significance has only recently been recognized.  I will summarize multiple observations of aerosol and NO2 concentrations from three independent satellite instruments that identify decreases in stratospheric NO2 concentrations following the major Australian 2019 through 2020 wildfires. The data confirm that N2O5 hydrolysis did occur on these smoke particle surfaces, with important implications for both composition and ozone depletion. However, additional and more important processes are evident in available satellite data. Those findings will be discussed, and avenues for improvements in understanding will be identified.  The results indicate that increasing wildfire activity in a warming world can be expected to slow the recovery of the ozone layer for at least the next several decades.  Possible linkages to atmospheric circulation and climate will also be discussed.
Speaker Bio: Dr. Susan Solomon is the Martin Professor of Environmental Studies at the Massachusetts Institute of Technology. She is well known for pioneering research on the Antarctic ozone hole and on the irreversibility of climate change. She received the 1999 US National Medal of Science (highest scientific award in the US), the Grande Medaille of the French Academy of Sciences, the Crafoord Prize of the Swedish Academy of Sciences, the Blue Planet Prize, and the Volvo prize. She is a member of the National Academy of Sciences, the French Academy of Sciences, the Pontifical Academy of Sciences, and the Royal Society in the UK. Time magazine named Solomon as one of the 100 most influential people in the world in 2008. A glacier in the Antarctic has been named after her.

Past:
April 26, 2022
Title: Clouds and Aerosols with the Atmospheric Chemistry Experiment (ACE) and SAGE III/ISS: Overview and Latest Results
Abstract: ACE (http://www.ace.uwaterloo.ca/) [1] and SAGE III/ISS are measuring atmospheric composition by solar occultation from low Earth orbit. The primary ACE instrument is an infrared Fourier transform spectrometer (ACE-FTS) and SAGE III/ISS is a UV-Visible-NearIR spectrometer. These instruments provide complementary atmospheric observations. ACE-FTS measures infrared spectra of aerosols and clouds by removing gas phase features to leave “residual” spectra. So far, ACE-FTS has observed spectra of Polar Mesospheric Clouds (PMCs), Polar Stratospheric Clouds (PSCs), stratospheric smoke, sulfate aerosols, cirrus clouds, and volcanic ash. This presentation will focus on volcanic sulfate aerosols and stratospheric smoke particles. We have discovered a new chemistry catalyzed by smoke particles injected into the stratosphere by extreme wildfires (“Wildfire smoke destroys stratospheric ozone” [2]). Most recently we have combined ACE-FTS infrared spectra with SAGE III/ISS extinction measurements to characterize sulfate aerosols more completely.
[1] P. F. Bernath, The Atmospheric Chemistry Experiment (ACE), J. Quant. Spectrosc. Rad. Transfer 186, 3-16 (2017).
[2] P. Bernath, C. Boone and J. Crouse, Wildfire smoke destroys stratospheric ozone, Science 375, 1292-1295 (2022).
Speaker Bio: Peter Bernath received his Bachelor of Science in Chemistry from the University of Waterloo and his Ph.D. in Physical Chemistry from MIT. After a post-doctoral stint at the National Research Council of Canada, he became a faculty member at the University of Arizona, followed by positions at the University of Waterloo and University of York. He is currently at Old Dominion University in Norfolk, VA, where he is a Professor and Eminent Scholar. His research interests are in laboratory spectroscopy, molecular astronomy, and atmospheric science.

February 22, 2022
Title: The JPL Lidar Atmospheric Composition Observations for NDACC: A Review of the Multi-decadal Ozone, Temperature, Aerosol, and Water Vapor Profiles at JPL Table Mountain (CA) and Mauna Loa (HI)
Abstract: Four ground-based lidar instruments have been operated for about three decades at the Jet Propulsion Laboratory Table Mountain Facility (TMF), California, and Mauna Loa Observatory (MLO), Hawaii. These instruments contribute long-term datasets of ozone, temperature, aerosol, and water vapor to the Network for the Detection of Atmospheric Composition Change (NDACC). The measurements are regularly used in international assessments of long-term trends of atmospheric composition in the troposphere, stratosphere, and mesosphere, and represent critical reference data for the validation of space-borne and airborne instruments, including SAGE III/ISS. Several examples of science and validation results involving these lidars will be presented, including recent discoveries that appear to shape the future of ground-based observations in support of future space missions.
Speaker Bio: Dr. Thierry Leblanc is a Research Scientist at NASA’s Jet Propulsion Laboratory (JPL), Principal Investigator of three JPL atmospheric lidar programs, contributing long-term measurements of atmospheric composition to the NDACC and TOLNet networks. His research interests are centered on the observation of ozone, temperature, water vapor, and aerosols using the Raman and differential absorption lidars located at JPL Table Mountain Facility (TMF) in California and Mauna Loa Observatory in Hawaii. He is also responsible for all surface, drone-based, and balloon-borne measurements performed at TMF. Thierry received his Ph.D in Atmospheric Physics in 1995 from the Université Pierre and Marie Curie (Paris, France) on the observation and modeling of gravity wave breaking and its role on the residual circulation. He joined JPL in 1996 where he developed the suite of JPL lidar retrievals used today, and built a high-capability Raman water vapor lidar for measurements in the UT/LS. He is currently co-chair of the NDACC Lidar Working Group, a member of the International Committee for Laser Atmospheric Studies (ICLAS), and a contributor to the TOAR-II Project and to several SPARC Activities.

SAGE III/ISS launched on February 19, 2017! The instrument has completed its prime mission of three years of operation onboard the International Space Station. The mission has been renewed for three additional years of world class science data collection, analysis, and public release.