While the COVID 19 pandemic caused another summer of virtual internships, it didn’t stop students from across the country from furthering their education and professional experience with NASA.

With over 1,000 applicants to the mission’s internship program, the Stratospheric Aerosol and Gas Experiment (SAGE) III team at Langley Research Center in Hampton, VA selected a team of six student interns to work on a variety of science and engineering projects during the 10-week summer session.

Maggie Zheng, a rising senior at the Massachusetts Institute of Technology (MIT) studying aerospace engineering, worked with the SAGE III science validation team on the code base and documentation for a new automated Quick Look tool of SAGE III’s atmospheric ozone and water vapor measurements. Typically, there is a period of two months between SAGE III collecting data and when that data is released to the public. Zheng’s development of a Quick Look tool will allow the SAGE III team to examine data before this post-processing period.

“The Quick Look tool will give scientists insights from our data on current events and will allow SAGE III data to contribute to ongoing conversations in the scientific community,” said Zheng.

Zheng will be further working with the SAGE III team on this project during the fall session of NASA internships. 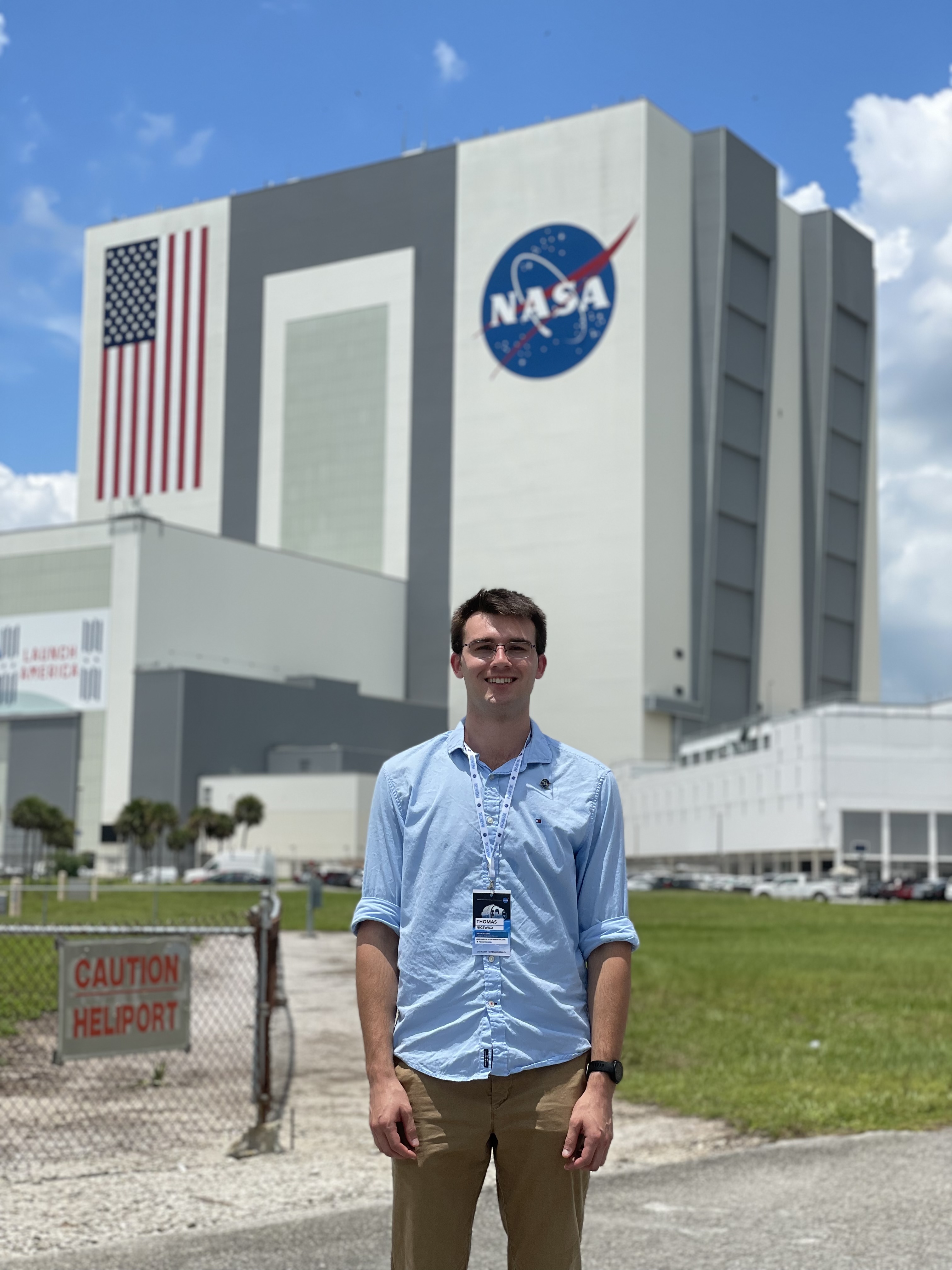 Thomas Nicewicz, a student at Washington and Jefferson College, worked to improve the coordinate transformation from the Disturbance Monitoring Package (DMP) to the Sensor Assembly (SA) on the SAGE III instrument. The coordinate transformation is needed to map small changes in attitude seen by the DMP to the SA and improves the team’s knowledge of SAGE III’s pointing.

In honor of National Interns Day, Nicewicz was randomly selected by the NASA internship program to attend the Boeing Orbital Flight Test-2 launch at NASA’s Kennedy Space Center in Florida with interns from across the agency. This uncrewed mission tested the end-to-end capabilities of the Starliner spacecraft and Atlas V rocket from launch to docking to a return to Earth in the desert of the western United States. Interns were able to view the launch to the International Space Station (ISS) from the coast of Cape Canaveral and tour some of the center’s iconic facilities.

“Through working on this project, collaborating with the other SAGE interns, and attending SAGE mission meetings, I learned about everything from atmospheric chemistry to collaborative code development to how ISS dockings can impact data collection. I’ve learned invaluable lessons this summer at Langley about the scientific process, collaboration, and lifelong learning that I am excited to apply in school, work, and life,” said Lomsadze.

Did you know that high school students can apply to the NASA internship program? Sophia Steven, a rising high school senior at Peak to Peak Charter School in Lafayette, Colorado joined the SAGE III internship team this summer. She created a user-friendly interface for extracting SAGE III science data from the database on the SAGE-PRIME data processing server. Based on a user’s requests, the interface can query the SAGE III database and return a collection containing the user’s specific data request, as well as a plot of the returned data all using Python.

Liam Hunsberger, a rising senior at Purdue University studying Applied Physics and Planetary Science, worked on a solution to better process limb scattering events measured by the SAGE III instrument. To process a limb scattering event, the raw data is retrieved, relevant telemetry is extracted, and a dataset is built for each limb event from the spectral data. Through the existing software, this process is done manually. Hunsberger worked to automate the process in Python by completing a script that can batch process multiple science events, and also created a functionality to continually search for and process events.

Michael Villordon, a senior at the University of Texas at Dallas majoring in computer science, worked on the Aerosol Classification Machine Learning project. The goal of Villordon’s project was to create a process that could automatically identify if any given point in a SAGE III data profile contained clouds via machine learning. Clouds often interfere with SAGE III measurements and are physically and chemically distinct from other atmospheric aerosols. An automated process to filter or to identify clouds can ultimately improve the quality of the data set and analyses using those data. Villordon’s work advanced the machine learning algorithm to make this process faster, more efficient, and highly extensible within a Python framework.

Although the SAGE III team of interns did not physically gather in person this summer, they still found the virtual internship experience to be rewarding.

“I was able to meet often with my mentors and collaborate with the other SAGE III interns virtually through Microsoft Teams and Git. I really appreciated how much time the mentors spent in training us in skills that will be useful to us later in our careers as well. And of course, I also loved getting to know the mentors and interns a bit outside of trainings and work,” said Zheng.

The NASA internship program wouldn’t be successful without the team of mentors across the agency that dedicate their time to support, educate, and train interns each year.

“The comprehensive training modules developed by the SAGE III/ISS mentors equip interns with skills and knowledge to put into practice wherever their careers take them, maybe even as future NASA employees. These are skills interns often do not have exposure to in their college careers, but are very beneficial in both the academic and professional environments,” said Dr. Charles Hill, lead SAGE III/ISS mentor.

The LaRC team of mentors hosted a couple of “Fireside Chats” to socialize with the SAGE interns, and even held a virtual Bob Ross painting night.

The innovation, hard work, and dedication of the SAGE III summer internship team will continue to support and benefit the Langley mission team for the foreseeable future.

To apply for the next session of NASA internships, please visit intern.nasa.gov.