A pyrocumulus cloud is formed by extreme heating of the air near the earth’s surface. Forest fires can induce the formation process of this type of cloud. The plot below shows an enhancement in the aerosol extinction coefficient detected by the SAGE III/ISS instrument between July 2017 and November 2017, following the enormous pyrocumulus event caused by the British Columbia wildfires in August 2017. The aerosol extinction coefficient value measures how much light is reduced based on the amount of aerosols present in a specific area of the atmosphere. You can think of this measurement as how much visibility you have when driving through a foggy area. 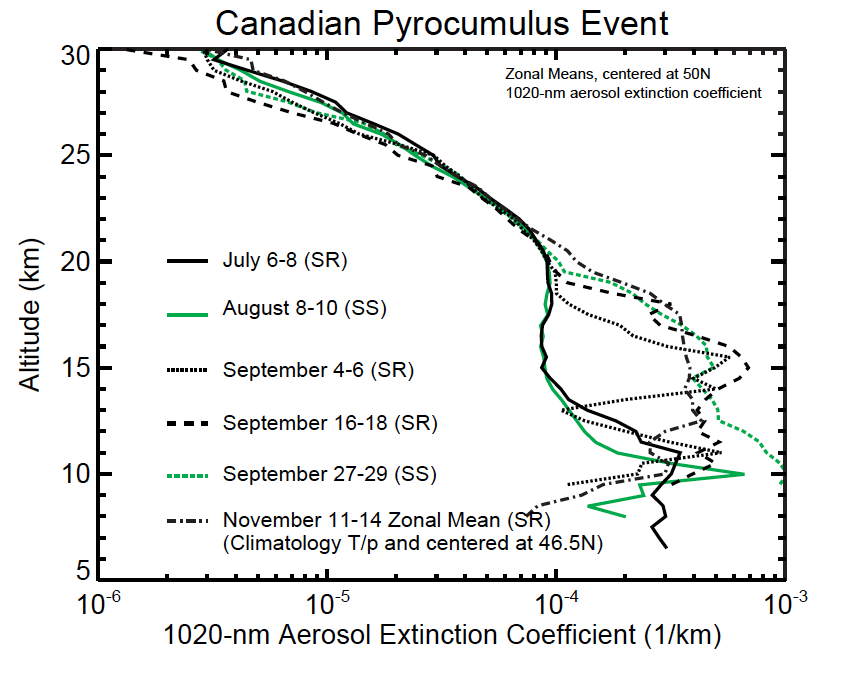 SAGE III/ISS detected a zonal mean, or average of measurements in a small range of latitude, of extinction at a wavelength of 1020 nanometers. The aerosol extinction coefficient was measured for six periods from July through November centered at 50°N (+/- about 5 degrees). The aerosol enhancements between July and September are a factor of six in the zonal means and up to a factor of 10 in some individual profiles. These levels are comparable to enhancements associated with small volcanic eruptions that have dominated stratospheric aerosol variability since the stratospheric aerosol minimum in 2000. By November, the aerosol enhancements have decreased in magnitude and become more zonally uniform, but have also spread to an altitude above 20 km.

This unique event is the strongest known pyrocumulus event observed to date. This is an important detection feature in SAGE III/ISS, as well as other NASA space-based instruments including CALIPSO (Cloud-Aerosol Lidar and Infrared Pathfinder Satellite Observation) and OMPS (Ozone Mapping Profiler Suite). This offers a unique opportunity for comparing collected data among multiple instruments. In the past, SAGE II found it difficult to observe pyrocumulus events for extended periods since much of the SAGE II mission occurred during a period of volcanically enhanced aerosol levels (peak Pinatubo extinctions in 1991 were more than 50 times higher than those shown here). Continued observations of this event are likely given the rather clean Northern hemisphere stratosphere.