By Allison McMahonMarch 15, 2018Uncategorized
No Comments

The Stratospheric Aerosol and Gas Experiment III (SAGE III), a NASA Langley Research Center-led mission, was launched on February 19, 2017 and installed on the International Space Station (ISS) during a 10-day robotic operation. Since March 2017, the instrument has been measuring and collecting data on the Earth’s sunscreen, stratospheric ozone, as well as other gases and aerosols, tiny atmospheric particles, found in the Earth’s troposphere, stratosphere and mesosphere. The SAGE III/ISS instrument makes these measurements through occultation, which involves looking at the light from the sun or the moon as it passes through Earth’s atmosphere at the edge, or limb, of the planet. The initial set of atmospheric data collected from the SAGE III instrument was released publicly in October 2017, and the first lunar data was released in January 2018. 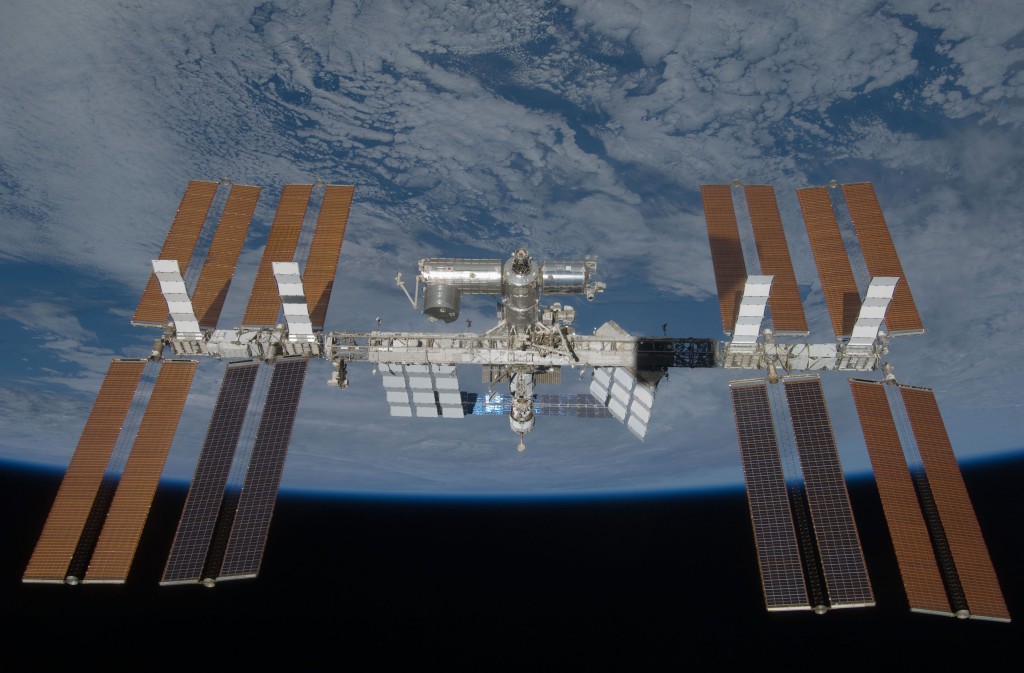 The orbital path of the International Space Station (pictured above) gives SAGE III a unique vantage point to collect scientific measurements of the Earth’s atmosphere.

Because the SAGE III/ISS instrument makes its measurements through remote sensing, collecting data from some distance away, the science validation team cannot be sure if the data they are receiving is accurate without first validating measurements. In order to validate the findings from the instrument, the SAGE III/ISS science data must be compared to in-situ measurements, or measurements made by other instruments or systems that come in direct contact with the ozone, aerosol, or gas data being collected. These in-situ measurements are collected by the Network for Detection of Atmospheric Composition Change (NDACC), an international group, part of the National Oceanic and Atmospheric Administration, composed of research sites across the world collecting data on the Earth’s atmosphere.

“These sites have been vetted, validated, and have a long statistical history of making science measurements with their instruments,” said SAGE III/ISS Science Manager Marilee Roell.

The NDACC will collect these validated measurements through various methods, with two primary methods being through lidar (light detection and ranging) and sondes. Lidar is a ground-based measurement technique that uses a laser to shoot a beam into the Earth’s atmosphere, causing light to scatter by the atmospheric gases and particles. Being able to detect the distance to these gases and particles, the lidar method is able to gather data on the Earth’s atmospheric composition. Sondes are lightweight, balloon-borne instruments that are flown tens of thousands of feet into the Earth’s atmosphere. As the instrument ascends, it transmits measurements of particle and gas concentrations by radio to a ground-based receiving station.
Sondes are used daily across the globe to capture meteorological data, allowing people to check weather
conditions each morning.

“We want to match our vertical science product to an externally validated source. It helps the science community have confidence in our data set,” said Roell.

The team is working towards having an externally validated aerosol sonde to compare to the collected SAGE III/ISS data. This effort is currently in the preliminary stages of validating the aerosol balloon sonde against a suite of aerosol sounders including lidar.

Currently, the science validation team is working to validate science data with NDACC locations in Boulder, Colorado and Lauder, New Zealand, which fall within similar latitude bands in the northern and southern hemisphere. To be precise in validation efforts, the lidar or sonde measurement is taken at the same time and location that the SAGE III/ISS instrument is passing over and collecting equivalent data.

One of the most recent validation efforts has taken place in Table Mountain, CA and Haute Provence, France. Both NDACC locations include implemented lidar systems, with systems being operated by NASA Jet Propulsion Laboratory in Table Mountain, CA. Validation efforts were taken a step further by including a third source of measurements: NASA’s ND/MAX DC-8 aircraft. The aircraft, based out of NASA Armstrong Flight Research Center in Palmdale, California, operates as a flying science laboratory. This aircraft helps NASA validate the accuracy of other remote-sensing satellite data, such as the SAGE III/ISS instrument, and can fly under the satellite’s path to collect the same measurements. Validating the science data using this method required the SAGE III/ISS instrument, the NASA ND/MAX DC-8 aircraft, and the lidar system in California or France to all be taking measurements at the same time and location. The science validation team worked to have all three systems line up while taking measurements, and collected some coinciding science data.

NASA has also produced a validation website for other NDACC sites to utilize. The website displays SAGE III/ISS overpasses of NDACC sites that are three weeks or less out. These sites can choose to make lidar or sonde measurements at the same time of the instrument overpass, and then compare SAGE III/ISS science data collected with their own to see if the two sets coincide. The science validation team is pursuing additional NDACC sites to coordinate overpass timeframes when the sites may be taking lidar and sonde measurements.