By Allison McMahonAugust 21, 2018Uncategorized
No Comments

Operating an occultation science instrument aboard a manned, frequently visited spacecraft the size of a football field poses many challenges to data collection and quality. The Stratospheric Aerosol and Gas Experiment (SAGE) III instrument, currently on board the International Space Station (ISS), is equipped with the tools necessary to mitigate and control these challenges.

Dave Huber, NASA LaRC Algorithm Developer, creates algorithms for the SAGE III instrument to manage these issues in space. “In an ideal scenario, SAGE III would have a clean line of sight to make measurements, there would be no motion disturbances or vehicles visiting the ISS, and the instrument would collect data at the right time and positioning of the Sun,” said Huber.

Because this scenario is not always the case, the payload contains two Contamination Monitoring Packages (CMPs) and a Disturbance Monitoring Package (DMP) to manage issues as they arise. The two CMPs contain crystals that vibrate at different frequencies based on what type of contamination may land on the instrument. The DMP consists of three highly precise laser ring gyros that can detect disturbances and their magnitude.

Blockage of the instrument’s field of view to the sun by ISS modules or visiting vehicles can be a challenge for SAGE III. These modules tend to reflect stray-light glint, or small flashes of light, onto the payload’s detector. These challenges cause instances where data collection is prevented or only partial data is captured. To ensure an accurate scan of the atmosphere is taken, measurements from the payload’s photo electric diodes, which are used for pointing at the sun, are utilized to screen partially blocked events. Huber’s algorithms can detect blockages within these measurements, and drop the scans affected. Using these pointing system measurements have shown striking results before and after even small blockage events.

While not just creating blockage issues for SAGE III, visiting vehicles also outgas while on the ISS, and can create a contaminated environment around SAGE III. If the two CMPs determine the environment’s contamination levels are high, the payload’s clear door will close to protect its sensors and allow science data collection to continue.

Many disturbances to science data collection can occur aboard the ISS. The station routinely will maneuver or use a mechanical arm to remove items for installation from visiting vehicles, with both causing mechanical vibrations. Being in low earth orbit, the station is frequently being re-boosted which can cause disturbances to the SAGE III payload. Even movement from the astronauts aboard the ISS can affect instrument pointing and measurements. SAGE III uses the Disturbance Monitoring Package (DMP) to measure all of the small motions from the ISS, and then uses the measurements to help identify and reduce noise found in the instrument’s signal created by these disturbances. A simple detection and mitigation algorithm using the measurements of the DMP is already in place, while a more advanced method will use the laser ring gyro rates to improve pointing accuracy in the future.

The internal clock of the ISS drifts slowly, and scientists assume positions of the sun based on time. This can create issues for scientists when processing data collected, as their assumed position of the sun can be off with the time drift. “When time is slightly off on the ISS, scans can show a three to four-kilometer shift in our ozone profiles, which is more than noticeable,” said Huber. Huber and a team of engineers at LaRC have created and implemented an algorithm to correct for the time drift when processing science data.

Despite the many challenges having a science instrument aboard the ISS, the SAGE III algorithm and science teams continue to find methods to collect the most accurate, quality data products for the science community interested in stratospheric ozone, aerosols, and water vapor. 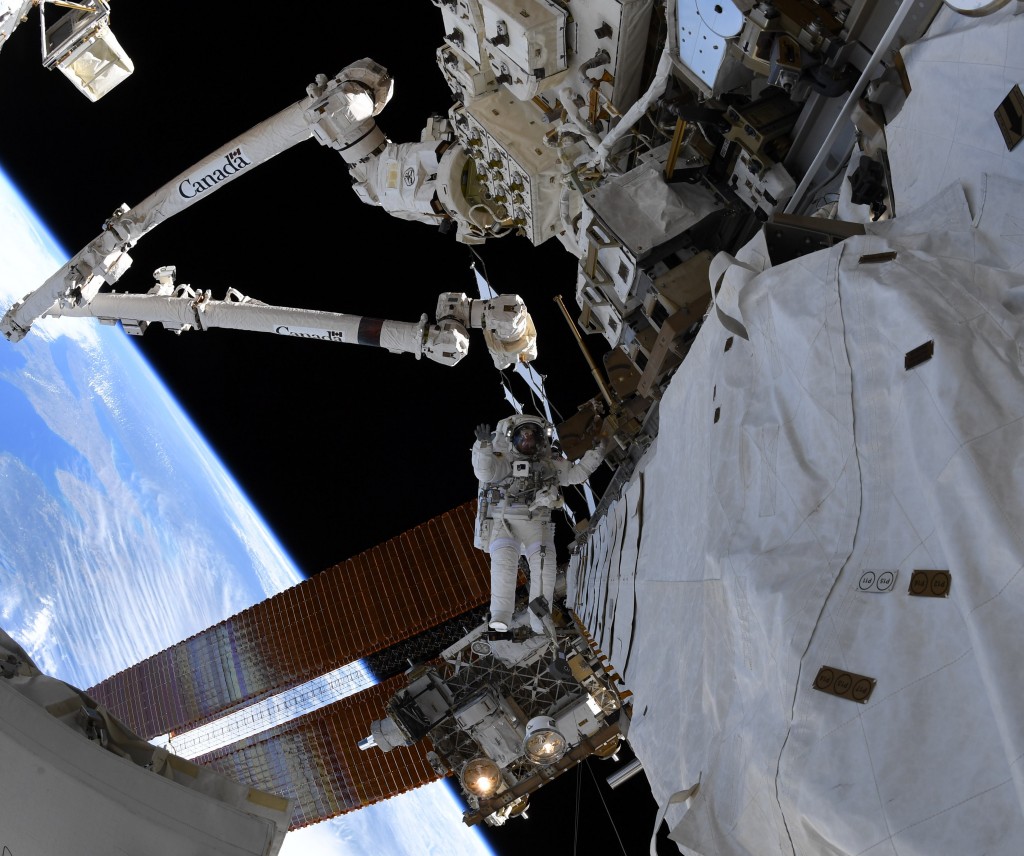 During a recent astronaut spacewalk, the SAGE III instrument was caught on camera mounted on the ISS. Astronaut activity on the ISS can cause disturbances to the payload and science data collection. Photo credit: NASA Astronaut Ricky Arnold