Wildfires have been burning across the state of California since August 2020. As the fires continue to rage, NASA Earth science missions have observed increased numbers of airborne particles known as aerosols across the country.

Different types of aerosols scatter or absorb sunlight to varying degrees, depending on their size, type and location. While most aerosols reflect sunlight, dark colored soot particles from fires absorb sunlight, warming Earth’s atmosphere, and shading the surface below it. When smoke from large wildfire events enters the stratosphere, these competing warming and cooling effects on the atmosphere can contribute to variability in the climate record.

In September and October, the Stratospheric Aerosol and Gas Experiment III (SAGE III) instrument aboard the International Space Station observed smoke from the ongoing wildfires using solar occultation, a measurement technique that involves looking at light from the Sun as it passes through Earth’s atmosphere at the edge, or limb, of the planet. The initial observation was made over the Eastern United States, but additional instances of increased stratospheric aerosols were observed south of California in the succeeding days. SAGE III observations show a significant increase in stratospheric aerosols when compared to data from July. 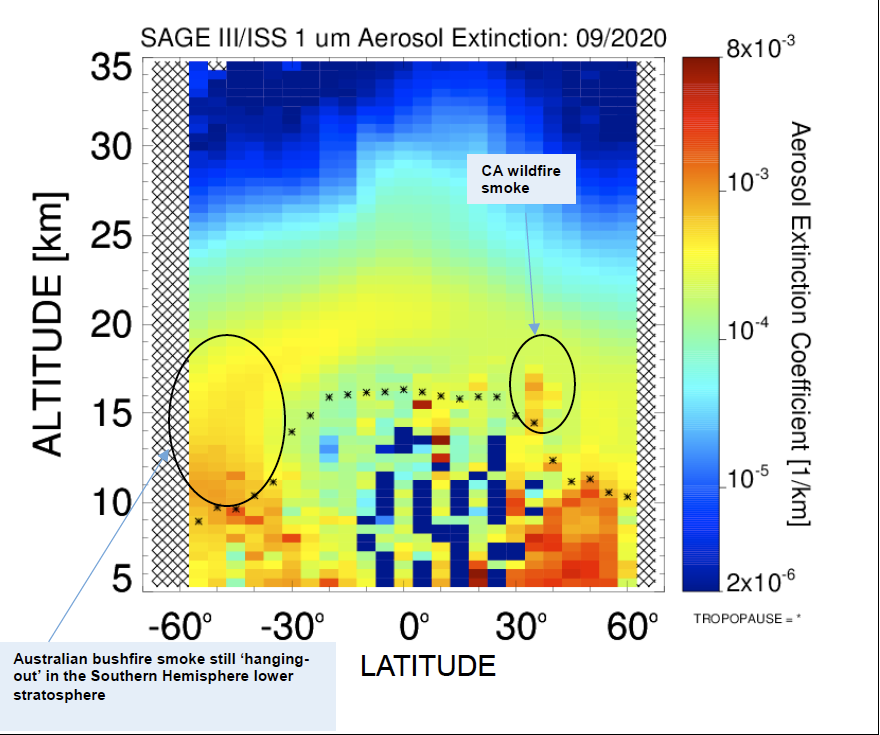 Aerosols that reach the troposphere, the lowest layer of Earth’s atmosphere where most of the life on the surface exists, only remain for about a week because rain cleanses them from the air. Stratospheric aerosols can stick around for months or even years.

SAGE III measures stratospheric aerosols at nine wavelengths. The multi-wavelength data of SAGE III is unique, providing important clues to aerosol type. SAGE III data from September and October suggests the aerosols were larger than in previous months. Variation in size of the aerosol particles can also suggest a change in composition.

“Based on the context, the larger particles seen in the SAGE III/ISS data are most likely carbonaceous, or soot,” said David Flittner, SAGE III project scientist at NASA’s Langley Research Center in Hampton, Virginia.

SAGE III observations of the wildfires are supported by additional satellite and human observations. Aircraft observations of the California Creek Fire from the National Weather Service suggested convection pushed smoke to just over 9 miles (15 km) into the air, which was also observed by SAGE.

This event marks yet another instance of intense fires lofting tremendous amounts of heat and moisture high into Earth’s atmosphere, creating dangerous smoke-infused clouds that resemble thunderstorms. The SAGE III instrument is still observing the stratospheric effects of the Australian fires that occurred in late 2019 and early 2020. NASA Earth scientists are tracking the frequency of these stratosphere-penetrating phenomena, also known as pyrocumulus events, and comparing them to the SAGE II instrument historical record.