By Allison McMahonNovember 8, 2021Uncategorized
No Comments

Did you know active volcanoes lie beneath the ocean’s surface? The Stratospheric Aerosol and Gas Experiment (SAGE) III on the International Space Station (ISS) instrument spotted remnants of the Fukutoku-Okanoba undersea volcanic eruption in Earth’s stratosphere.

Fukutoku-Okanoba erupted vigorously in the Philippine Sea on Aug. 13, 2021. Although the volcano’s summit is approximately 80 feet under water, the powerful eruption was still forceful enough to send ash and sulfate aerosol particles high above the sea’s surface and well up into the lower stratosphere at an altitude of approximately 16 km. While SAGE III was not measuring in the immediate vicinity to capture data at the time of the eruption, SAGE III observations passed through the same latitude one week later, and measurements discerned a new aerosol layer in the lower stratosphere.

These are important observations for SAGE III to make, because they help scientists understand global climate change better. Stratospheric aerosols such as these act to cool the Earth’s surface by reflecting sunlight back to space.

It is worth noting that sulfate aerosols don’t blast straight from the mouth of an underwater volcano into the stratosphere. Sulfuric dioxide from the volcano reacts with water to form sulfuric acid, which then condenses into the sulfate droplets spotted by SAGE III.

The map below illustrates the geographic area of the late August 2021 SAGE III measurements. 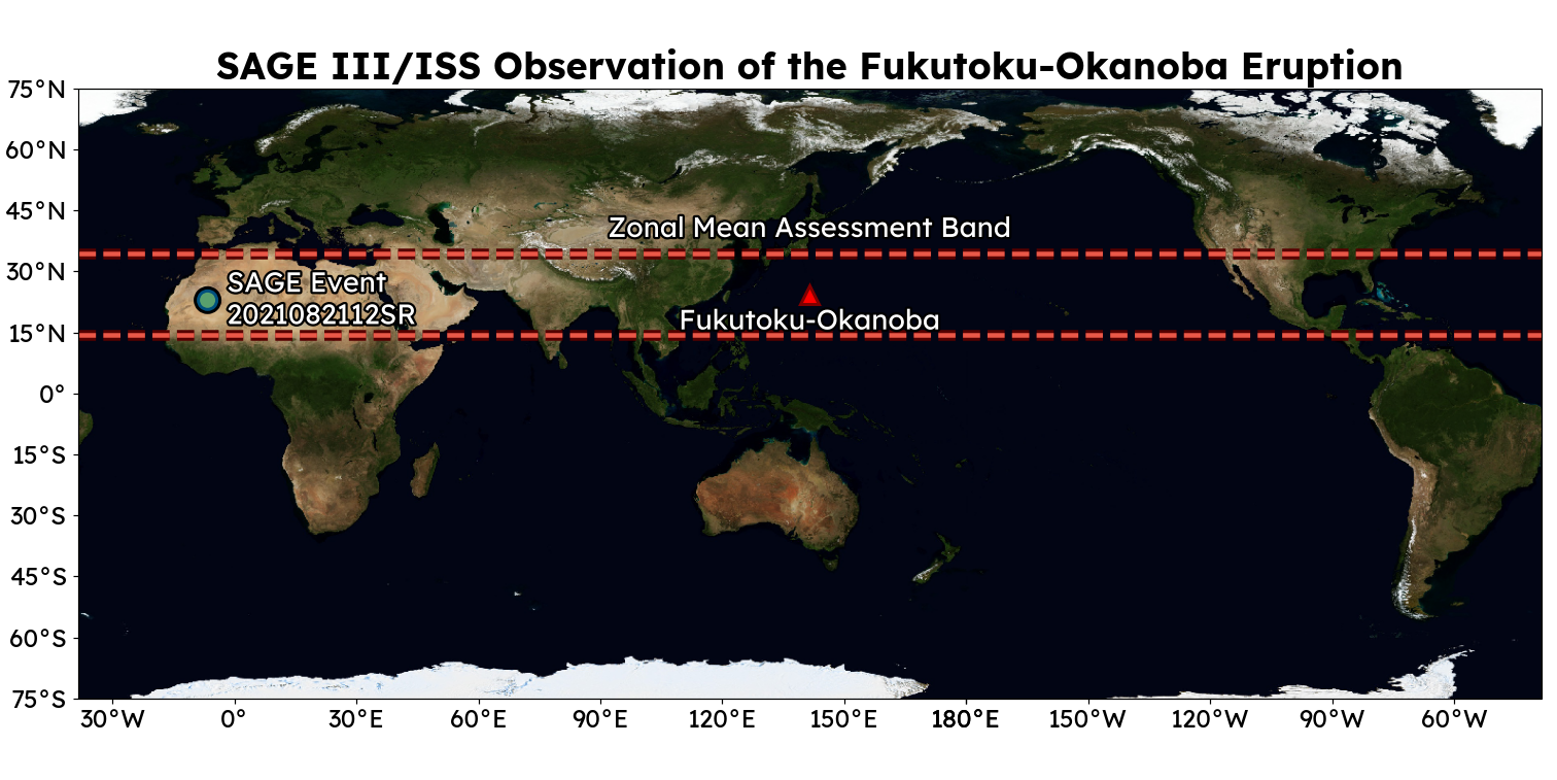 The data plot below shows the clear spike in aerosols right above the tropopause (dotted line) from the eruption of Fukutoku-Okanoba. Although this was a comparably small eruption in relation to some in the historical record, multiple minor and moderate eruptions causing aerosol enhancements in the stratosphere have a cumulative effect. The result has been shown to be important when studying past changes in Earth’s climate, as well as predicting future changes.

Higher in the stratosphere around 23 km, SAGE III also saw an enhanced layer of aerosols remaining from the eruption of the La Soufrière volcano in April 2021.

The SAGE III team continues to examine the evolution of these volcanic disturbances in the stratosphere as the instrument samples the tropics/sub-tropics in the coming months.