By Allison McMahonFebruary 22, 2022Uncategorized
No Comments

Dec. 4, 2021, Mount Semeru, one of the largest and most active volcanoes on the Indonesian island of Java, erupted. Ash, avalanches, and rivers of water and volcanic debris called lahars resulted in the tragic deaths of more than 50 people.

At the time of the eruption, the Stratospheric Aerosol and Gas Experiment (SAGE) III instrument on the International Space Station (ISS) was observing other areas of the planet. One month later, SAGE III took measurements within the latitude band of Mount Semeru (8°S) and detected an enhancement of aerosols in Earth’s stratosphere at an altitude of approximately 19 km. Because of the orbital path of the ISS, SAGE III observations usually pass through a given geographical area of Earth’s atmosphere once per month.

These observations are important because they help NASA scientists understand global climate change better. Stratospheric aerosols from eruptions such as Mount Semeru can actively cool the Earth’s surface by reflecting sunlight back to space. In terms of climate impact, Semeru’s effect is small, similar to the eruption of Fukutoku-Okanoba in the Philippine Sea in August 2021. It is important to note, though, that multiple eruptions of this same degree have a cumulative effect in Earth’s atmosphere.

The map below illustrates the geographic area of the January 2022 SAGE III measurements. 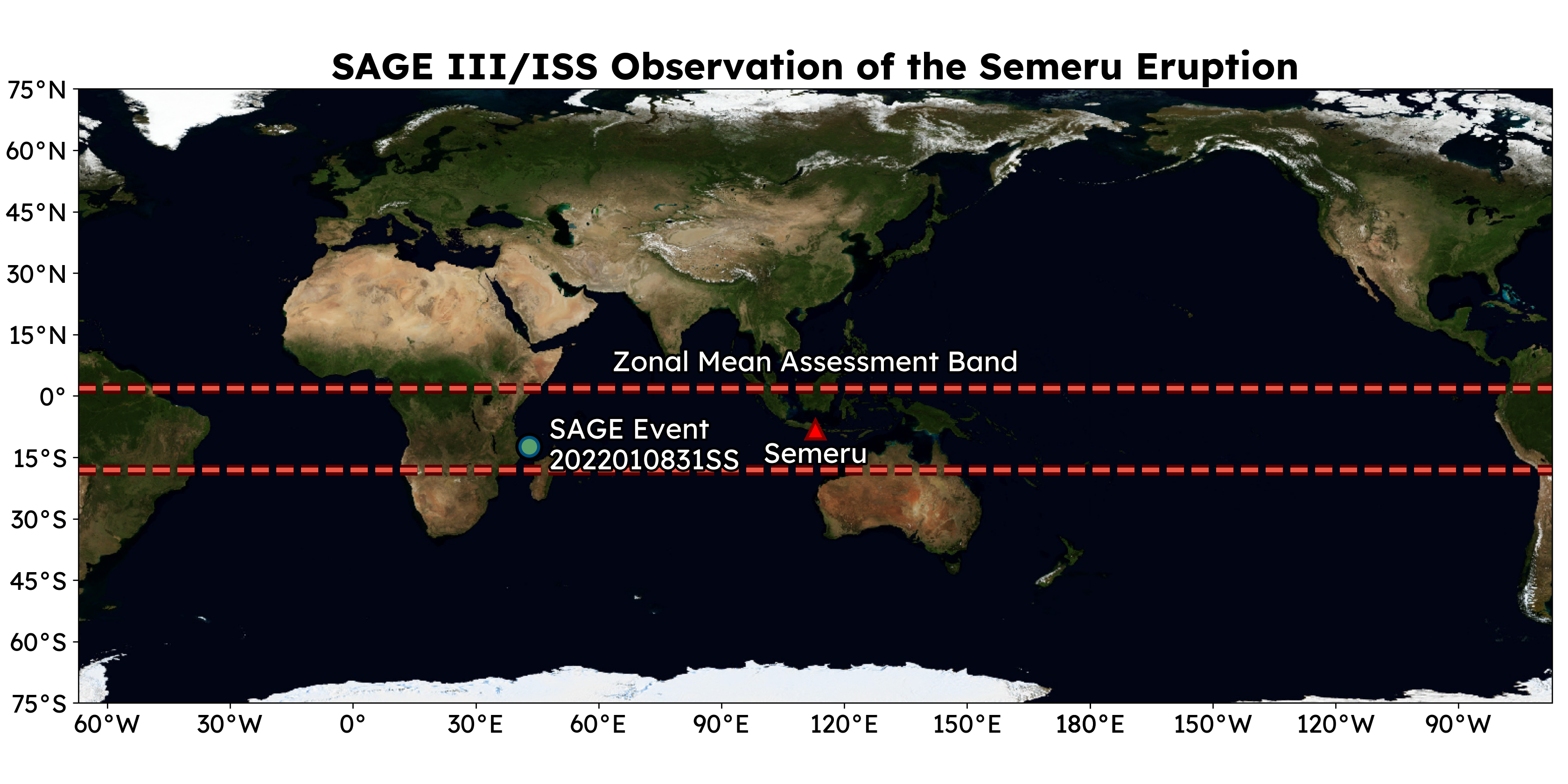 The data plot below displays the spike in stratospheric aerosols from the eruption above the tropopause, the area in Earth’s atmosphere directly below the stratosphere. The data from SAGE III did not show much ash within the aerosol cloud. 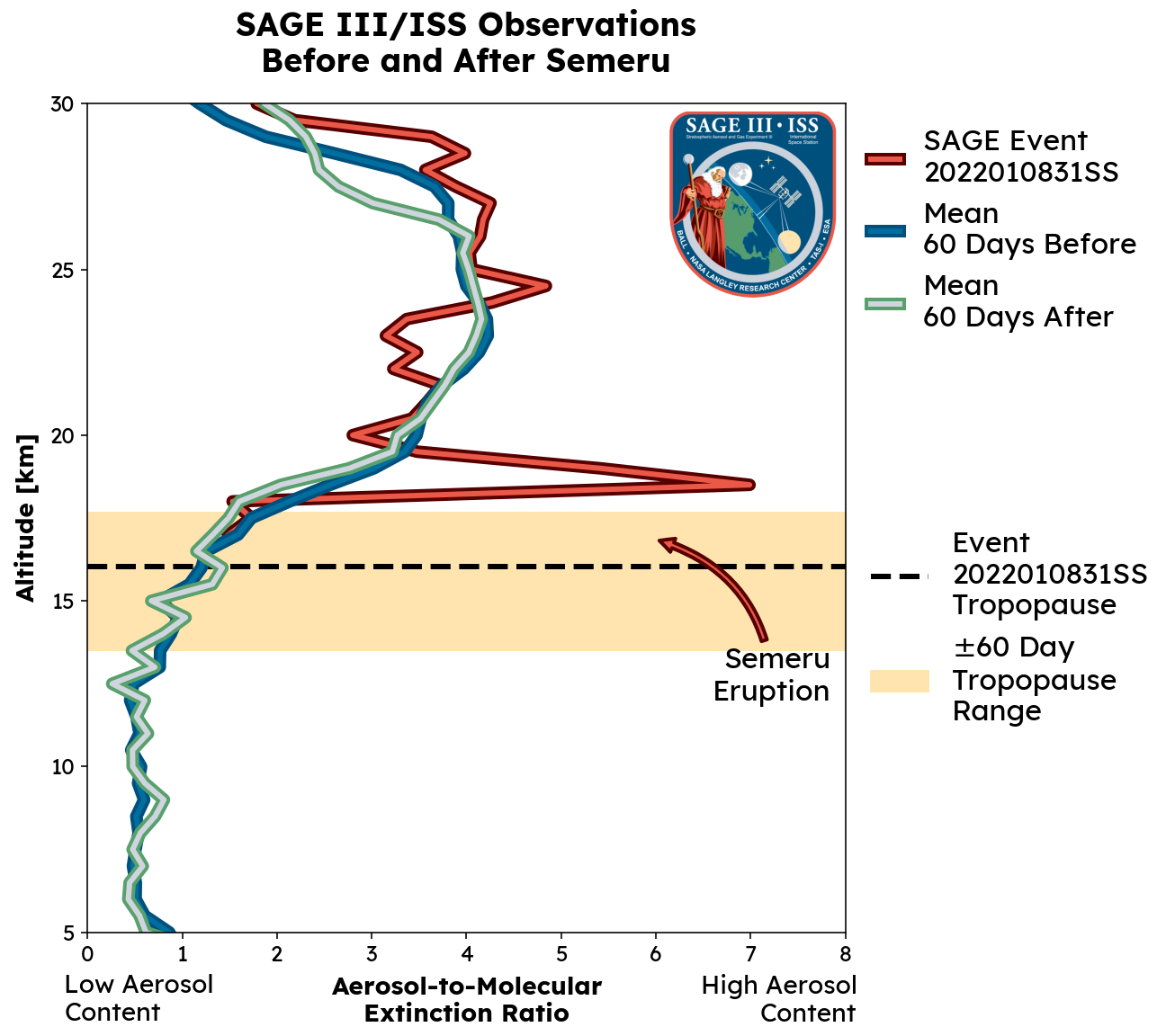 Below, you can see the change in aerosol particle size due to the sulfur dioxide injected into the atmosphere. The sulfur dioxide from the eruption reacts with water in Earth’s atmosphere to form sulfuric acid, which then condenses into new sulfate droplets which are detected by the SAGE III instrument. 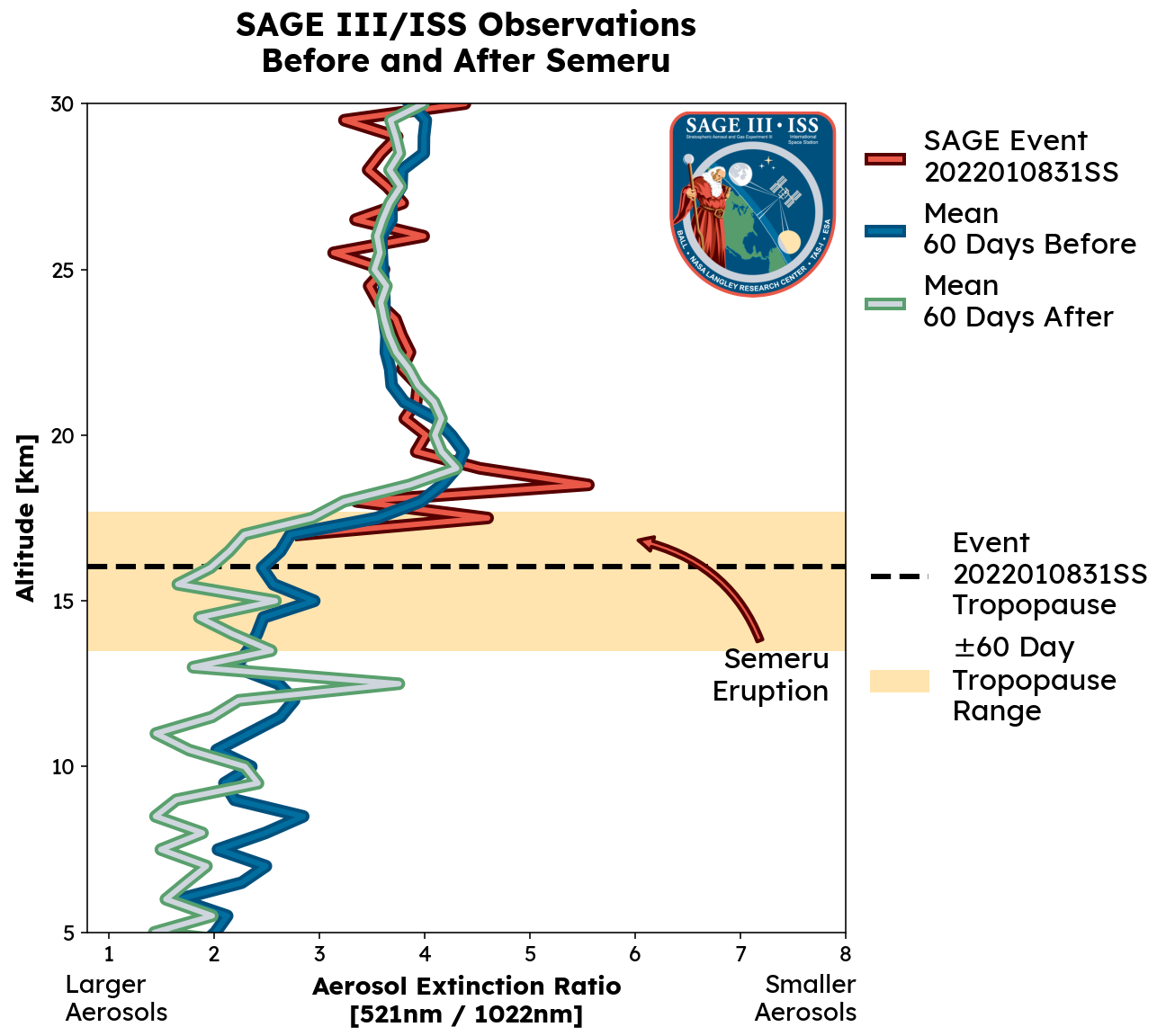 After further analysis of additional SAGE III January 2022 data, NASA scientists have seen the aerosol cloud from the eruption remain in the Southern Hemisphere tropics, but not spread much in longitude as it is driven around the globe by stratospheric wind patterns.

As SAGE III visits the tropics over the following months, the SAGE team will be watching to see how the Semeru aerosol cloud mixes with the rest of the stratosphere.